As I was driving home from the airport, I noticed what looked to be a motorbike just like Tim's. As I drove by I saw it was a Triumph Daytona, exactly the same bike that Tim had - an uncommon bike in a town of 6,000. I told Dad about it when I got home, and he went down and had a look at it. About half an hour later, when he drove into the driveway and had one foot out the door, we both looked up as a very low flying helicopter - lower than one had ever crossed the house before - flew directly over our house in drizzly weather.

As we walked inside, I told him, 'that was two things' that happened relating to Tim. He also told me that the motorbike had 32,000 km on it. I was 32 at the time. Later that night I came to the realisation that these two occurrences were a message from God. 'Don't worry, everything's okay'. And 99% of my sadness was lifted from me. And so it came to pass, one of the scriptures that was read out at the funeral, "Blessed are they that mourn: for they shall be comforted" - Matthew 5:4. God is good!

Nearly two years later on August 1, 2011, a thought came into Dad's mind in the middle of the night when he couldn't sleep, about the trajectory of the helicopter that flew over the house on Dec 2, 2009. In his words, "I was awake last night and thought of the time the heli. flew low over us and headed off on what I recalled as a Nth. Easterly direction more or less in direction of clock, i.e. heading 045. This calculator link gave it as more East, i.e. 065 for direct Alex. - Pinckney, and distance is displayed also, being about 14,500kms from memory. Just put in the lat. and long. co-ordinates between the towns and map and answer supplied." 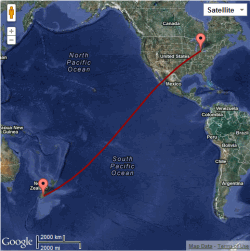 And from a subsequent email: "I believe it is possible to fly a fixed heading all the way which actually takes a longer total ground distance. Used to know about it but of course never used it in my flying."

The real reason was this. Unbeknownst to Dad, I was beginning to have doubts as to whether these two "coincidences" were a message from God at all, and it was starting to disturb the peace that God had given me. But God knew. So God put it in Dad's mind to go and check on the direction of the helicopter, to show me that yes indeed, this was a true message from God, and it restored the peace that God had given me back on December 2, 2009.

So I plotted a line on Google Earth over the house in the direction that I thought the helicopter was travelling in, and it came out as 63 degrees, fairly similar to what he came up with from his own memory - in the general direction of the clock - nearly two years later. A direct line from the house to the 'clock on the hill' is about 72 degrees, not the 45 degrees as was his original rough guess. (View Pic)

This is the second of four messages we received from God about how Tim is. Read the 3rd message.

Update: Apr 2, 2013: I decided to go up to the clock on the hill to verify some information in my timeline and drove up to the start of the walkway up to the clock. When I arrived, the time on my car clock said 12:50PM. This number became important to me as of early January 2011, and as early as December 24, 2009. I then drove down the road a bit further, and then drove back to the start of the walkway, getting out to start my walk up the hill with my GPS a few minutes later. The time on my GPS when I turned it on? 12:50PM. I guess the clock on the hill also read 12:50PM, but I didn't look up to it. This number wouldn't mean much to anyone else, but to me, it was a hand of God moment - a confirmation that I am going in the right direction. As if to tell me that He has His hands on all these things, and they were ordained by Him.