US$3.95
(Kindle)
US$6.95
(Paperback)
Note: This story appears in chapter 2 of my new book, "Proving God with Numbers, Second Edition", available now!

This is a story that proves that God know's the future, and is able to divinely align us to take advantage of His foreknowledge, if he chooses to do so!

God gave me a super-natural experience in which He showed me the concept, some details, and how I would eventually sell the business, all in a moment of time! Then, over time, He proved how completely perfect His timing is, through the performance of the global share markets!

While I was sitting outside on a rock, enjoying the early-afternoon sun, I suddenly felt something come down from above my head and down into my body! As it did, I suddenly had a knowledge of a full business plan from beginning to end! It was as if someone had condensed all the salient aspects of the business into one moment of time, and revealed them to me all at once.

Suffice to say, this was an amazing experience for me! In the divinely inspired business idea included the concept, where I would take the business, and two exit strategies - one of which was hidden from my eyes, amongst some other things. It is not normally possible for someone to know everything about something at one point in time, and coupled with the fact that there was a physical component to receiving this idea, i.e. I 'felt' it come into my body, I knew this was a divinely inspired business idea from God.

This is the first and only time that this has happened to me in my life, and it happened on December 26, 2010 - Boxing Day for those of us who celebrate it.

As time went on, God gave me tangible proof that this was indeed a gift from God, and I can prove it to you by showing you a couple of graphs!

The idea for the business was a proprietary equities (stocks/shares) business, whereby I would fund successful share traders, they would trade my money, and we would split the profits at a predetermined rate. Given that I am based in New Zealand, I was going to set up the business here first, and then take it to other countries to set up other branches elsewhere.

Given the state of the global economy following the financial crisis of 2007/08, getting into the stock market would have been considered a fairly risky bet, and not one many people had taken on. Nonetheless, I had absolutely no doubt whatsoever that my prospective business would succeed, because I knew that the business idea had been given to me by God!

There was one other country that was given to me in the divinely inspired business idea, and that was Hong Kong. I have no idea why Hong Kong was given to me, but it was, and so I was intending to set up a branch of my business in Hong Kong once I had properly established my business here in New Zealand, in terms of both profitability and proving the business model.

Now I will show you proof of God's foreknowledge of events, by showing you how perfect God's timing actually is, and how He divinely aligns us with those events.

Have a look at the charts below. 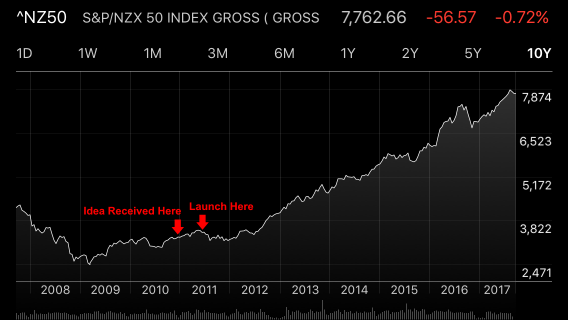 In the first one you will see a graph of the New Zealand stock market since 2008. Look at what it has done since then. It has basically been in a straight line up since early 2012. My business would have been launched in mid-2011, in near perfect timing to catch one of the longest bull market runs in New Zealand history. Since mid-2011, the New Zealand market has more than doubled in value! That is an example of how God can divinely align us into future events as only He knows what is coming. 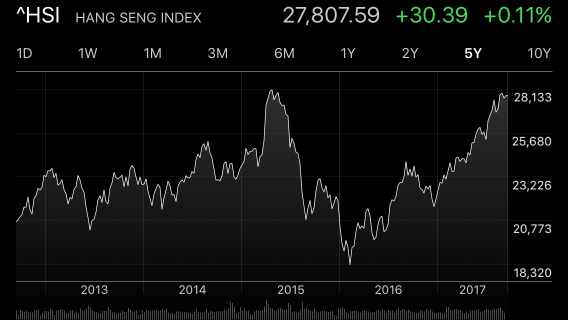 In the second graph I have provided a picture of the Hong Kong "Hang Seng" stock market index. Though this market has not had as good a run as we have had in New Zealand, it all depends on when you get into and out of the market, what strategy you are employing, and what individual stocks you are buying.

While I don't know at what point I would have got into the Hong Kong market, nor how long the bull market will run in either New Zealand or Hong Kong, what I can say is that with God, anything is possible! God knows the future, and can align us with certain events, times, people and places to achieve a certain purpose. And though I did not get to start this business due to factors beyond my control (that's another story!), God still provided me with a testimony to share with other people about what is possible if you align yourself with God!

One other interesting aspect of this divinely-inspired business idea is that God had been preparing me for this business since I was 18 years old. I had gained an interest in the share market around that time and purchased my first shares in 1995. Two years later I wrote a study on New Zealand share market returns which you can read here, and then one year later in 1998 I won a national stock picking contest run by the New Zealand Stock Exchange, which you can see here.

One of the biggest things I have learned out of all of this, is that you can lose your place in life and the work that God had prepared you to do! The only reason that I wasn't able to start this business is because I didn't sell my earlier business to the company that was supposed to buy it, because they didn't offer me a fair price. In fact, a couple of weeks after giving me this divinely-inspired idea for the business, I had my one-and-only direct conversation with God in which He told me that my website was worth US$1.25 million to them, despite only offering me US$400,000-$500,000. You can read about that conversation with God here.

In spite of this, God still decided to show me exactly what it was that I was supposed to be doing, and what he had prepared for me in advance to do!

So you can see in the graphs above the performance of the share markets in New Zealand and Hong Kong, and how God's timing was absolutely perfect, assuming that I had sold my earlier website business to the Nasdaq-listed company that approached me to buy it.

I was also planning on giving away 10% of my traders' gross profits to various charities, so the business stood to benefit multiple people around the world, not just myself.

It just goes to show you how God allows free-will to interfere with His plans, if He allows it to do so!

I suspect that by not selling my previous website business and not being able to set up this new divinely-inspired business, I have probably lost out in approximately $30-$40 million in future wealth!

It just goes to show you how single one-off decisions can completely change your life, if we are not careful!