The following is a study I wrote on New Zealand share market returns while I was studying at the University of Otago in Dunedin in 1997. It was a self-directed study, nothing to do with my University studies, most of which were a waste of time, and I wouldn't recommend anyone go to University without first knowing what they want to do, or unless it's required for your vocation.

The best learning I have done has all been self-directed and practical. Books written by or on Warren Buffett, Peter Lynch ("One up on Wall St"), "Super Stocks" (Kenneth Fisher), were all influential in formulating my understanding of the market.

After I had written up this study, I distributed it freely to anyone who wanted a copy on a local New Zealand sharemarket forum. As it happens, the name that I came up with for the stock selection method ("Stock Characteristics Method") matched my initials - 'S.C.M.'!

The VSM (Volume Spike Method) was a phenomenon I observed mostly with small, lightly traded stocks and I included it in the aforementioned study below.

Unfortunately I don't have the original file, so had to suffice with a scanned copy.

An interesting recent example of a stock which falls broadly in line with the results of the study is online accounting software company, Xero. 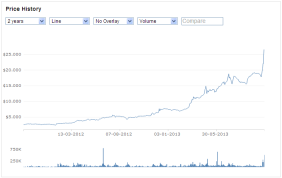 At the time of the last update, Xero was trading at $27.00 per share, valuing the company at over $3 billion. At the same time its revenue was expected to be around the $50 million dollar mark over the last 12 months. This gave the company a Price/Sales ratio of over 60! The share price gained another 70% over the next 5 months, hitting an all-time high of $45.99 on March 6 2014, up from an initial public offer price of $1 in June 2007.

Interestingly, the trend line gave traders a clear line break of the trend, enabling them to exit before the stock went into freefall and continued its downward track.

I note that in the below study, I have labelled stocks in this category as "speculative stocks" and that they can often be bid up to "unrealistic valuations". This category of stocks has high volatility and is therefore high risk, as can be seen in the chart below. Xero is now down over 50% since its intra-day high 6 months ago. It is clear that if you want to invest in these types of companies, your timing is key, and if you buy stocks with such excessively high P/S ratios (In general, over 5 is high risk, under 1 is best), then you are playing a high stakes game with your capital.

That's not to say that you can't make money with these types of stocks - clearly you can - but your timing is key! 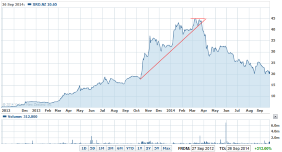 In comparison, Finzsoft, a financial software provider traded at a low of 30c in March 2014, valuing the company at $2.5 million. This gave it a Price/Sales ratio of under 0.3! The stock rose to a high of $2.60 on the 3rd of October, 2014 - a 766% gain in 7 months, on the back of an expected 300% increase in shareholder profit. This valued the company at just over $21 million, with revenues expected to increase in line with shareholder profit.

Assuming revenues doubled to just under $19 million as a result of the new contract, that would give Finzsoft a P/S ratio of 1.1 - still a lot better than Xero's 20x figure!

The difference between buying a stock with a low P/S ratio versus a high one is that you are more likely to get 'positive' earnings or revenue surprises, rather than negative ones, and their associated price rises or falls! - Updated 15 October, 2014

As if to confirm what I previously wrote in the entry above, Finzsoft shares rose more than 40% today to $3.98 on the back of a large rise in interim profit, and more importantly, the statement that profit was likely to "materially exceed" the previous forecast of quadrupling their profit! See link below:

December 18, 2014: Finzsoft to potentially be acquired at under the market rate

May 29, 2015: Finzsoft Solutions more than triples its net profit of $755,000 in the previous financial year to $2.7 million, on the back of more than doubling its revenue from $9.4 million to $19.6 million. (Source: NZX) The largest shareholder now owns nearly 90% of the company following the completion of the takeover offer on March 30, 2015.

I have watched this company with interest even before its February, 2015 listing on the Australian Stock Exchange, and its performance on the stock market has been very interesting indeed!

It falls under the "LPN" category in my aforementioned study below, under what I call "speculative stocks", which is one of the categories to make the highest returns.

As mentioned in that study, I note that it is perhaps the lack of any real measurements by which to evaluate the value of these companies that allows them to skyrocket in price, and equally as quickly to fall!

Since listing on February 24, 2015 at 40 cents per share, the stock quickly rallied as high as $3.15 in less than a week, before crashing back down to 63 cents, and then rallying back to todays price of around $1.30 - all in the space of just over one month!

It remains to be seen just where this stock finds its equilibrium level, but in the absence of any real measurements by which to value the company, it seems as if this company is open to wild speculation and hope/fear/greed until real revenue, sales and profits are on the horizon!

The second part of this study looked at a phenomenon I called the "Volume Spike Method". This entailed identifying abnormal rises in volume well above the average daily turnover for a particular stock or share.

In the below image I have identified where a volume spike has occurred in a company called "a2 Milk Company". In this case it was a cornerstone shareholder selling down their holding after a potential takeover attempt. After a period of stagnation in this company's stock price, it started a rapid rise from around 75c to $1.20 in little more than a month, representing a 60% gain. As of Friday the 18th of December, 2015, it is trading at $1.43.

This study suggests that a volume spike can be used to time an entry into a stock based on an increased level of interest and activity surrounding the company concerned. 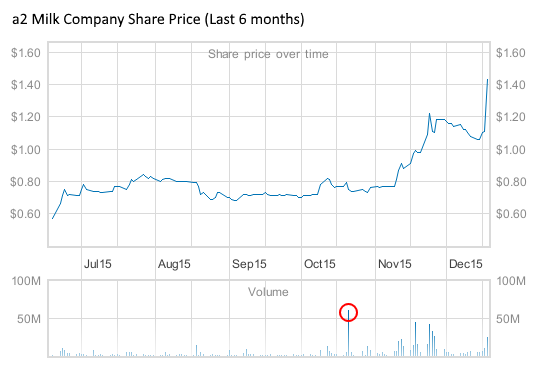