Pentecost & The Feast of Firstfruits

US$3.95
(Kindle)
US$6.95
(Paperback)
Note: This story appears in chapter 7 of my new book, "Proving God with Numbers, Second Edition", available now!

Exactly 14 weeks to the day before Israel's 70th anniversary on May 14, 2018, God inspired me to book the King David Hotel in Jerusalem. This would be the culmination of a series of trips that were marked with the number 7 to prove that God was behind them! Over more than 3½ months, He inspired me with 12 places to visit, and two of them were separated by exactly 50 days - The exact length of time that God told the Jews to count between the Feast of Firstfruits and the Feast of Weeks (Shavuot/Pentecost), known in Judaism as the "Counting of the Omer".

In this article, I want to share with you a story about how God verified a part of the Bible relating to Pentecost and the Feast of Weeks, also known in Judaism as "Shavuot". If you don't know much about the feasts of Israel, as I didn't before God created a story to verify a part of the Bible, I can recommend you read "The Feasts of Israel" by Dr. Chuck Missler and Dan Stolebarger. There is a link to it here.

On February 5, 2018, I suddenly received very strong inspiration to book the King David Hotel in Jerusalem. I had stayed here twice before in both 2010 and 2016. No sooner as this had happened, the immediate date that came to mind was the 14th of May - the 70th anniversary of Israel's independence in 1948. So I went ahead and booked the King David Hotel in Jerusalem for 5 nights.

This trip, if it went ahead, would be the culmination of four God-inspired trips to Israel that He had marked with the number 7 to prove that He was behind them! The first trip in 2010 (Hebrew year 5770) ended up leaving exactly 7 weeks to the day that I had been given the idea to go by God (April 10 - May 29, 2010), although I didn't actually discover that fact until about 2 and a half years after I got back.

Another interesting aspect of that first trip that I didn't discover until 8 years later, was that it was exactly 1978 years to the day that Christ was crucified that God inspired me with the idea to go! In addition, I was exactly 33 years and 33 days old on that day - the same age that Christ is believed to have been when He was crucified! I only discovered this fact in May 2018, after God inspired me to purchase a book on the feasts of Israel. See the image below. 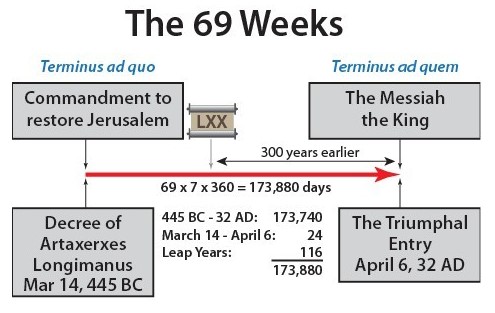 Source: Chapter 5, "The Feasts of Israel" by Dr. Chuck Missler and Dan Stolebarger.

One other interesting aspect of this trip is that God provided me with business class tickets for the trip, and marked it with the number 7. I had originally purchased economy class tickets, but decided to upgrade them to business class only 5 days before departure. At around the same time, a new client earned me NZ$7,000 in 7 days, and $15,000 over the course of the month, effectively paying for my new business class tickets!

Though I had earned up to NZ$20,000 per month from maybe 20-30 referred clients trading at different brokers, it was highly unusual for me to earn so much from just one trader, over such a short period of time - particularly from a broker that typically paid out about 50% less in commissions than other brokers did in the same industry. So it was clear to me at the time that this was a blessing from God! More here.

The second trip (June 14-30, 2016) that He marked with the number 7, was mostly paid for by the sale of my piano which took exactly 7 months to the day to sell!

That is not a coincidence to me, that is the Hand of God at work! Only He could have come up with that pattern, without my foreknowledge of it at the time. I didn't even know there was a Hebrew year until about the year 5775 (2015).

On February 6, 2018, the day after God inspired me to book the King David Hotel, He started giving me places to write down to visit while I would be in Israel. I decided to record these in an email sent to myself, as a way of recording the day and time that these places were given to me to visit.

Here is a list of the various places that God gave me to visit, including the date they were given, and the number of days since He gave me the last place to visit. That will be important when it comes to verifying the part of the Bible about the Feast of Weeks or Shavuot, and Pentecost.

After that, everything went quiet.

That was until May 1.

While I was sitting on a recliner watching TV, at about 5:30PM, God suddenly gave me inspiration to visit the Garden Tomb in Jerusalem! It was a real bolt from the blue, as He hadn't given me any further places to visit since the Church of the Holy Sepulchre, so many weeks ago!

Immediately I began wondering exactly how long it was since He had given me the last place to visit, so I went and fished up my old email I was sending to myself, recording the dates and times that these locations were given to me.

The last place was given to me on March the 12th - the Church of the Holy Sepulchre in Jerusalem.

Immediately I went online and made a quick time-duration calculation and discovered that it was EXACTLY 50 days since He had given me the last location to visit! I knew from my basic understanding of Judaism that 50 was an important number to them, but I wasn't sure exactly where from, except for the 50 year Jubilee period at which point all debts are cancelled and property returned to their original owner.

However, that's when I discovered these verses about the Feast of Weeks or Shavuot in Leviticus 23:15-16:

And that's when I realised the significance of what God had just done!

The Garden Tomb in Jerusalem is a competing site for the potential location of Jesus Christ's burial and resurrection, as is the Church of the Holy Sepulchre. Whether or not either of these two locations are the authentic locations of His burial and resurrection isn't the point. The point is that both of these locations relate to Jesus Christ as being the "firstfruits" from the dead, (1 Corinthians 15:20) and that God separated these two locations by exactly 50 days in His giving me of the locations to visit or write down.

In so doing, He verified a part of the Bible that refers to the Feast of Weeks/Shavuot/Pentecost and validated the fact that God was indeed behind this trip to Israel and the various locations He was giving me!

There was one last point that I discovered only a week ago, in that in Jewish tradition or history, King David is said to have been born and died on Shavuot/the Feast of Weeks, so it is interesting that the very first thing that God inspired me to do on this trip was to book the King David Hotel!

For the record, here are the remaining locations that God inspired me with after the 50-day period:

One other interesting observation is the number associated with the Church of the Holy Sepulchre. It was 17 days since the previous location was given to me. Some say that Christ rose from the dead on the 17th day of Nisan, so was God giving me another sign here? I'll leave that up to you to decide!

Another interesting observation to be made was that there were exactly 12 weeks to the day from the very first location that God inspired me with on Feb 6, to the Garden Tomb on May 1! That seems too much of a coincidence to me not to be by design! In addition, He gave me a total of 12 locations to write down. That also seems rather by design than coincidence.

So it would appear to me that God has woven a whole raft of hidden codes and numbers through this story for me to unravel, as they are revealed to me. And there may be more! I will just have to wait and see if there are any more hidden codes to be revealed within this story!

P.S. After writing about this story, God got me to look through a book that I had bought on December 23, 2017, but hadn't yet read, in which I discovered that each of the three suggested itineraries for visiting Israel and Jerusalem all began with a visit to the Church of the Holy Sepulchre, followed by a visit to the Garden Tomb! (View Pic) So I have added it at the bottom of this page! Scroll down to see it.

The Holy Land for Christian Travelers by John A. Beck