The New Zealand stockmarket continues its stellar rise, up nearly 60% since the beginning of 2012 until today, just over two years ago.

See previous stockmarket update of September 27, 2013. The fact that the last market update I did was exactly 7 months ago to the day was something of a coincidence. It came to mind to check on the performance of the NZ market on the 26th of April, and so I decided to update the site the next day, which was exactly 7 months ago to the day since the last update. It made no difference whether I updated the site on the 26th or the 27th of April because it was the weekend and the market was closed. As it happened, both Pope John Paul II and Pope John XXIII were made saints by the Roman Catholic Church on April 27.

The Bible being considered a "book of sevens", this seemed quite significant. Of course, now why God chose for me to update this site in precisely a 7 month interval is something of a mystery, although I can think of a number of reasons why!

News: The NZ Stockmarket records one of the largest foreign capital inflows of any country measured, when compared to historical averages for the 4 months to June 14, 2014: Read More... 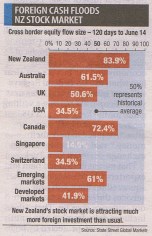